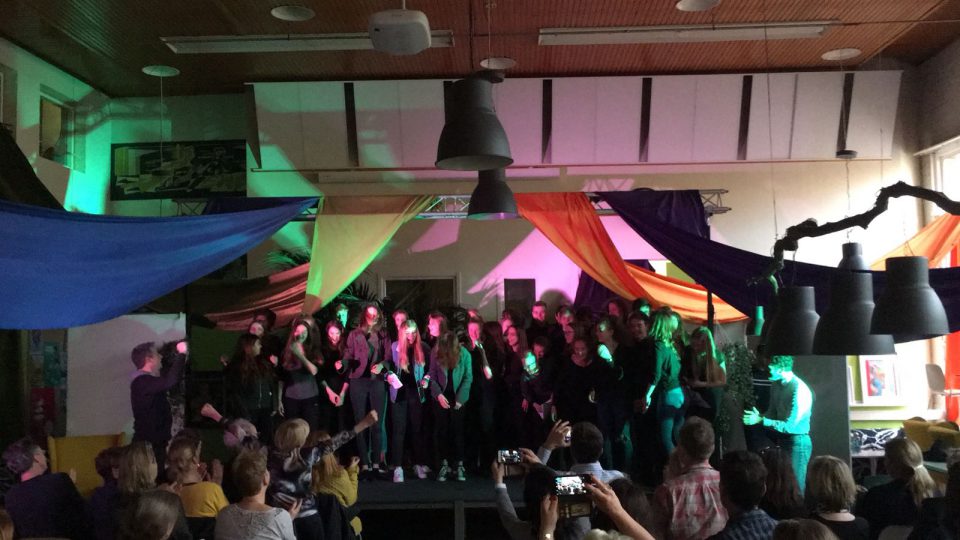 April 12th last saw MaartensCollege visited by an odd lot of ‘hempen homespuns’ indeed. Reportedly ‘half wake, half asleep’ the students of TTO 4 and MYP 5 experienced a Midsummer Night’s Dream in the Green Room, where they laid their scene on a beautifully self-designed set. Marc and Daryl from the Shakespeare in Performance Project, like a modern-day Puck and Oberon, worked their magic with the 60 odd students, and led them through a workshop preparing students for the role of Hermia, Helena, Demetrius, Lysander, Egeus, Theseus, Hippolyta, Oberon, Puck, Titania or any of the ‘rude mechanicals’ or fairies which live in that mysterious dream-like world created by master William. All the roles were given out twice and the five acts were divided into two equal measures, one performed by each group. Many were nervous and many struggled with the language and their parts at first… As the fantasies grew wilder and the students more confident, the wonderful half-shaded, spirited reality was brought to life by the students. That same evening the Green Room was a crowded cauldron containing the strangest creatures one ever did see (parents), and all were enamored by the wonderful, shape shifting fairy land created before their very eyes. It’s a good thing Puck made amends afterwards….

Shakespeare’s Midsummer Night’s Dream has been running for 12 years now at MaartensCollege and is part of an English language project centering on eloquence, wittiness, conciseness and creativity. All the important language and communication attributes which Shakespeare was so good at.

The final assignment for English will be to either re-write a scene from MSND in a modern setting, using modern language yet be witty, concise and eloquent, or student can opt for an ‘epic rap battle of history’, writing and performing a self produced rap battle between two characters from MSND of choice. It’s as the bard said; ‘Better a witty fool then a foolish wit’.